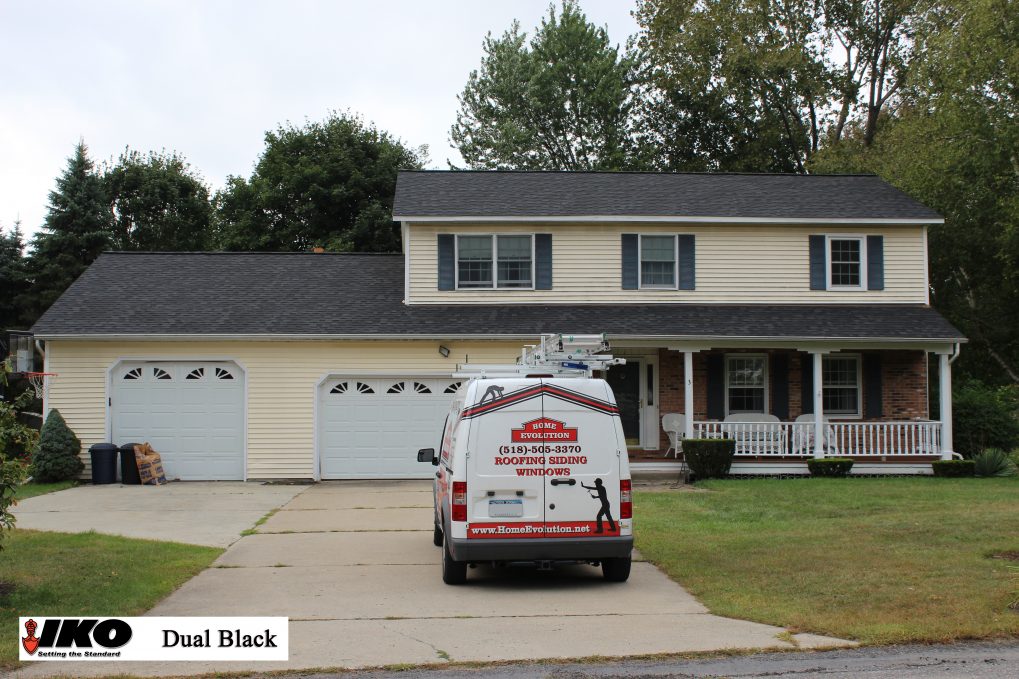 Shingles roofs are a majority of our repairs and replacements, the shingles on a home if installed correctly can last anywhere from 20 to 25 years. That’s why it’s a popular choice when it comes to roofing. Shingle roofs can be installed in one full day’s work depending on the size of a roof and how many employees are on the job. With the proper experience roofing contractors, can get done with a replacement fairly quickly. Most shingle replacements result due to serious roof damage from weather or poor installation. There is a lot of different colors and styles of shingles to choose from, that’s why its often an easy choice for customers. Under the shingles goes a underlayment which resists water penetration into the decking. Water proof membrane is added to the valleys and low pitched areas to protect the decking as well during winter times. A new shingle roof can add great curb appeal to any house so why not replace your old one for a new one, quit putting off the replacement for small repairs that wont last long. Take the step and get it done the right way, the first time.

Slate is another form of roofing often considered to be somewhat dangerous to install, due too little to no grip when it comes to stepping on the tile. It is really durable, having a much longer life span than a shingled roof. Slate looks absolutely beautiful but can also weigh your house down. Typically there are very little experienced roofers who know how to do slate, so don’t push you luck when it comes to hiring someone who has no experience to show for.

Metal roofing is another choice but also has its downside. Metal roofs can last double the amount of a shingle roof if properly installed. Metal roofs often weigh a lot less than the two shingles and slate. Its fire resistance and conducts less heat. The downside of metal roofs is that it can become expensive, it tends to be noisy, and is prone to denting easily. Metal roofs are also a lot more likely to be hit by lightning, making a dangerous situation for your home.

People often forget that when it comes to roofing, shingle roofing isn’t the only type. Flat roofs don’t get shingles installed due to there being barley any pitch for water to flow off of. There is several different methods and types of flat roofing. There is torch down, which deals with applying heat to the material to merge with the roof. This method is often time consuming and can be dangerous if not taken into consideration the proper precautions. It’s a good method to get a water proof seal because of the way its laid onto the roof surface, the heat from the torch melts the product making it bond together after it cools off. The main concern of torch down is the installation process. A torch is applying heat from a flame to melt the rubber material. There have been cases where the house may catch on fire due to human error. That’s why when it comes to torch down make sure you hire an insured and experienced roofer that does flat roofs in your area. Our roofing contractors in Albany NY have seen firsthand the damages left behind by inexperienced contractors, thousands of dollars in damages because they were installing the torch down roof incorrectly. Take time with getting a hold of a roofing contractor, make sure they know what to do, check their credentials by visiting websites like angies list or BBB. All these websites make it easy for you to look at the reviews people leave, then assess whether they can be trusted or not.

EPDM roofing is also another system that we take part in, inexpensive than other types, its known as a rubber roof throughout the roofing industry. The synthetic rubber is very strong and durable, can be installed pretty quickly and most people go with EPDM rather than torch down. EPDM has a much easier install procedure that most, it’s also very much weather proof and can withstand high temperatures. Our roofing contractors in Albany NY have very good experience with EPDM, very easy to install and quite fast as well. The customers like the jobs they do and we take pride in that the jobs are well done.

In upstate New York, the weather can be unpredictable, with heavy rain falls to winter snow storms. People that have roofs in poor condition will often face the reality of leaks and damages accumulating more every time it rains or snows. People that can afford it will often replace the bad roof as soon as they can to avoid more damages and costs. People who can’t afford it will keep holding off on replacing the roof because it can often times be expensive. The owner of the home will often times struggle to save up some money due to them falling on hard times. We at Home Evolution will be giving back to our community by giving away a free roof to a family in need, whether it be a family that has fallen on hard times or someone who can’t afford it.